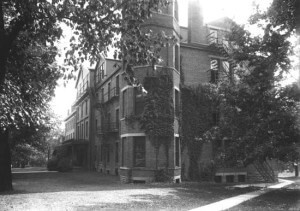 The History of Our Building

Chartered on February 23, 1849, the Oxford Female Institute's original building stood at the corner of College and High streets in Oxford. In 1856, a new three-story building was built to the south and the two buildings were connected by a latticed walkway.  By the end of the 1800s, the buildings had been connected with additions for a north wing, library, chapel, and other rooms. In 1928, Miami University acquired the building and remodeled it through architect Robert Harsh who unified the different parts of the building with a Georgian facade. The ballroom, the final addition, was added by Miami University in 1929 with monies raised by the Daughters of the American Revolution (DAR) in honor of First Lady Caroline Scott  Harrison.

Caroline Scott was born in Oxford, OH in 1832. At the age of 20, she graduated from the Oxford Female Institute where her father, the Reverend John Witherspoon Scott, was the first President. She met Benjamin Harrison while he was a college student in Cincinnati. He transferred to Miami in the 1850's and they married in 1853, one year after their graduations. Benjamin Harrison was elected President of the United States in 1888. Caroline Scott Harrison served as the first national DAR President while living in Washington, D.C.

Around the time that the building closed, a group of Oxford citizens came together to both establish an arts center and to preserve the historic building. The Oxford Community Arts Center incorporated in 2001 to save the historic building and repurpose it for use as a community arts center, providing a needed arts space for the adults, families, and children who reside in Oxford and the surrounding areas. The OCAC now serves as a vibrant multi-generational gathering place with classes, performances, workshops, and community engagement events that reach over 13,000 participants annually.

The OCAC provides a home for art entrepreneurs and enduring partners, including: